So the plan was to get all the old Astrocave content back online, plus some exciting new material coming soon! before launching into things properly. Trouble is, getting your new design sorted out, coding stylesheets and uploading images takes a very long time, and really, done is better than perfect. And by that logic, incomplete and imperfect is best of all!

Plus, there’s stuff going on that I should really mention. Namely that Slapping Christie, the short film that I co-produced with Holly Alexander last year, is screening this Friday 9 May at the St Kilda Film Festival. 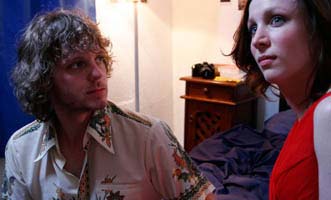 Directed by Mitch Forrester, and written by both Holly and Mitch, it’s about a guy called Stephen (played by Sam Herde), and what he does when his ex-girlfriend Christie (Suzie Stapleton) starts shagging his French housemate (Jonathan Katz). Or, to use one of our many taglines, it’s about the brief period of hatred at the end of a relationship that comes between love and indifference.

Or, if that’s too late for you, you can go to Session 5 at 9pm the same night and see Brett Stanning’s charming film Play. Keep an eye out for yours truly appearing as a playful office worker!

There you go, all important, timely stuff. I realise that I’m kind of assuming here that someone’s reading this and actually cares. But you know what they say: dance like nobody’s watching; blog like the whole world is watching.

One thought on “Fest of the best”