Today’s post has two shameless, self-serving objectives. The first is to raise awareness of Melbourne Cupcake Day, an alternative first-Tuesday-in-November event for those who prefer sweet treats over losing money and throwing up. It deserves to be a phenomenon – the bake-off that stops a nation (better slogans are welcome).

Secondly, I want to put my own cupcake day entry on the internet: 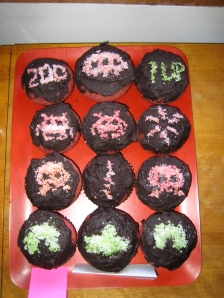 I admit they’re not the most beautiful things in the world, but those are red velvet cupcakes topped with space invaders made of pop rocks.

It’s my belief that that is exactly the sort of thing the internet loves, so I’m going to put it there and see how long it takes for the first search engine hit to land. Take it away, Alta Vista!

And while we’re on a slightly retro topic, there’s something I’ve always wanted to say about Space Invaders, the game. It was hugely popular in its time, so much so that for me and my peers it became the generic name for all video games (“let’s go play the spacies!”).

And yet, I was always a bit disappointed that the aliens in the game didn’t look like the creepy monsters on the side of the machine:

Someone please make a version with them in it. That would be so cool.

5 thoughts on “Contents may differ from package”