Lex Luthor is clearly a bad scientist. If for no other reason, then the simple mathematical formula of ‘bad guy + mad scientist’. (What? That’s how maths works.)

But he does go to some good sources for his science news. In Action Comics #890, where Action Comics is famously the title that Superman first appeared in, but which Lex Luthor has recently taken over in what could be considered a metatextual response to his failure to conquer either Superman or the Earth, we have the following scene: 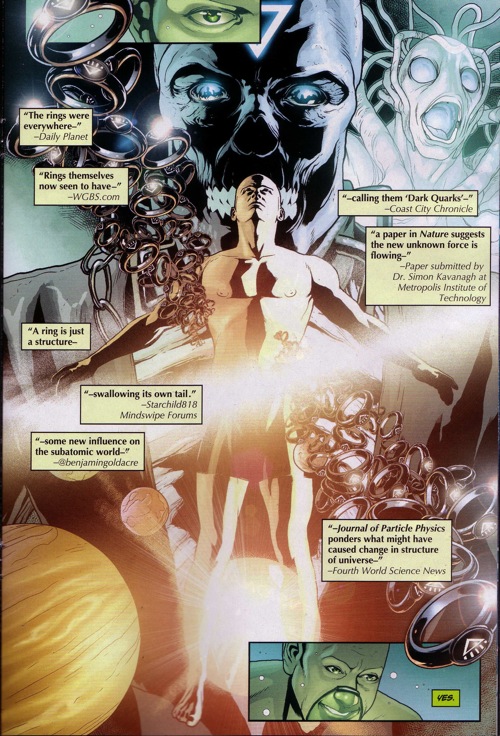 Here, Luthor has plugged himself into his Lexcorp Intelligent Listening Engine, a phenomenally over-engineered virtual reality system that allows him to search for the mention of certain key words on the internet (most of us would just use Google, but then we’re not mad geniuses). He’s seeking news on certain black lantern rings, which appeared in DC Comics’ Blackest Night storyline (don’t bother asking, just read Wikipedia). And yes, he’s wearing bike shorts.

But the important bit is in the lower left of the page, where we see the following caption:

That would Dr Benjamin Goldacre, writer of the Guardian column, blog and book, all called Bad Science and all well worth reading. And although his actual Twitter username is @bengoldacre, and his interests are typically more around medical research than subatomic physics, it’s a nice tribute. Where better to go for your sciencey internet needs?

And after all, comic book science is some of the best bad science you’ll find.

Bonus feature: If you want to know what happens in the rest of the comic, check out the live reading from CONvergence 2010. I had no idea they did that sort of thing, but I found it in an internet search. Without, I might add, the aid of any fully-immersive 3D display, and without having to strip down to my underwear. Take that, Lex Luthor.